By NICHOLAS F. MONDELLO
Writer for All About Jazz 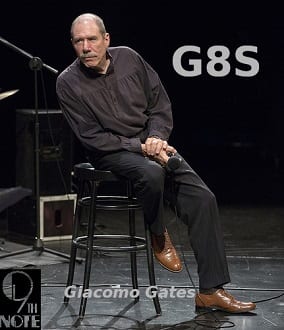 2018 worldwide news reports have detailed all sorts of technologically-assisted archaeological finds. In the US, a previously unreleased John Coltrane album and other musical discoveries have popped up. And—whaddya know?—here is an unreleased and enhanced set of tracks from the Hipster to the Hip, Giacomo Gates. And it is a helluva find, you dig?

G8S, originally laid down in 2005, is a short-form release of four tunes performed by Gates and a hip vibes and rhythm quartet. It is yet another in a series of fine recordings which affirms why Gates retains the vocalese Heavyweight Crown.

Jay Hoggard’s vibes sets the hard bop ambiance on Gates’ original, “A Different Thing,” before His Hipness bops into things swing. The tune is a stone cooker. Tony Lombardozzi, long a Gates sidekick, and Hoggard offer neat solos over Rick Petrone’s bass and Joe Corsello’s drums. If you hear “Paper Moon” on Hoggard’s intro on the swinging “Come Along with Me” (itself a take on 50s “space race” mania) you’ve got ears. Gates covers Eddie Jefferson’s vocalese which itself parrots Lester Young’s “Paper Moon” solo.

On this session and on all of his performances, Gates demos a marvelous sense of rhythm and hard swing. Notes are placed precisely into swing-syllables with ultimate flair. The guy just never misses. His baritone is robust, but never a bust. He’s a jazz Everyman and as genuine as it gets.

Gates covers Bobby Troup’s gastronomically tinged “Hungry Man” in a tasty, swing groove. (He later re-recorded the tune on his 2008 recording Luminosity on Double Dave Records). The dining here is cool and swinging. This type of tune is a Gates speciality—he can make lyrics pop and swing his plates off the table. His sassy scat leads into Hoggard’s fine vibe solo. Lend an ear to Petrone’s drive here. “Why Try to Change Me Now” is the gorgeous ballad feature. It is another of those great tunes that seem to get unfairly neglected. Balladic and soulful, Giacomo’s baritone adds such genuineness to the story. Catch Gates’ rhythm interpretation here. His triplets are hiplets, for sure.

Kudos to all Gates’ rhythm mates here. They lay things out perfectly throughout. Also to Christian O’Dowd for the discovery of the tape and to engineer/producer Rob Fraboni, who used his technical wizardry to give us a nice vinylized feel here.

One has to wonder what other gems are hidden in recording studio racks or folks’ garages. Surely, there are going to be other finds down the line. G8S sets the quality bar high.
Track Listing: A Different Thing; Come Along with Me; Hungry Man; Why Try to Change Me Now.